With Valentine’s Day right around the corner, the idea of love and companionship is going to be heavily featured in the media and a hot topic on everyone’s mind. But what is the true definition of love? Is it simple chemistry, compatibility, or something much more complex?

In the spirit of the holiday, Divorce Attorney Angela Enholm conducted a Valentine’s Day Survey to answer those exact questions. Taking a randomized group of 1500 individuals, she asked a series of questions geared towards finding out which attribute humans look for and appreciate most in their significant other. A list of seven qualities, ranging from attraction and sense of humor to financial stability and lifestyle similarities, was given to each participant to rank. After recording the age, gender, and top quality out of the seven options. Additionally, we recorded each participant’s age, sex, and geographic location to test for trends among groups.

Here’s What We Found 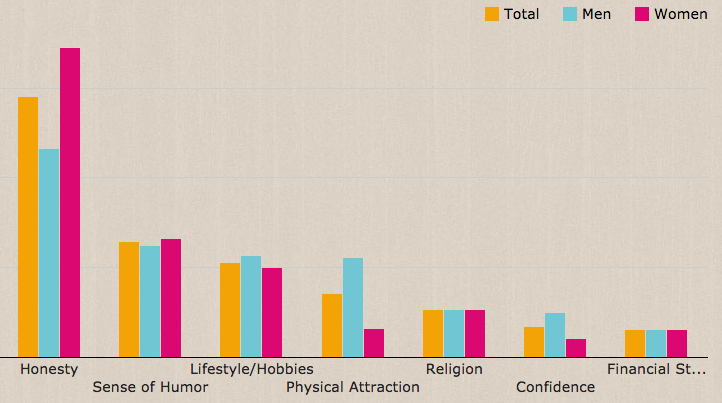 The highest selected total quality, scoring an overwhelming 36.9% majority was honesty. Coming in at second place with 17.5% of the vote was sense of humor, followed closely behind by similar hobbies/lifestyles in third with 14.7%. Rounding out the bottom four were physical attraction at 10.5%, shared religious beliefs at 8.4%, confidence at 6.2%, and financial stability with 5.8%.

Is Our Generation Failing At Love?

Diving a little deeper into the statistics reveals some interesting data about age and gender differences on the concept of love. For example, participants 55-64 and older accounted for over 50% of the votes for honesty while participants between the ages of 25-34 had the least interest in honesty, with only 29.6% of the vote. Similarly, males chose physical attraction at a rate almost three times higher than their female counterparts.

Taken altogether, this data tells us that there is a large correlation between the stage of one’s life and their definition of love. However, at the end of the day, being honest with yourself and your partner is what it takes to foster true love and happiness. After building that strong, trustworthy foundation for a relationship, you can then focus on discovering more attributes that are important to you in the long run. On this Valentine’s Day, take the extra effort to be authentic with those close to you, and who knows, you may find what you’ve been looking for all along.

The Toll Sexting Takes on Marriage